How Terminus is Building Loyal, Raving Fans Through Multimedia Content

What are you willing to do to build an audience of raving fans? It’s the content creator’s dream, but many fall short of achieving this because they rely on outdated or cringy tactics.

⇒ Being overly bold (for no good reason).
⇒ Jumping aboard controversial bandwagons (just for the buzz).
⇒ Ebbing and flowing with whatever the latest trends are (because of a lack of creativity).

Throw all of that out the window.

People don’t like and follow influencers for any of these reasons (or at least, not for long). And they definitely don’t become raving fans. Instead, what appears to work today is finding unique ways to connect with your audience.

Right now, people are consuming content in various formats. So if you’re relying solely on blogs, videos, or audio, then you’re missing opportunities to reach audiences that prefer other channels. This is what makes multimedia a huge success.

“I think the cool part about what we’re doing at Terminus right now is that genuinely the multimedia content fits in everywhere,” said Jillian MacNulty, Content Marketing Manager at Terminus.

Brands like Terminus are maximizing their content by using a combination of video and audio. And they’re doing some pretty cool things. Not only are they using the two formats to create thought leadership content, they’re using them to build excitement among their fans. Let’s take a look at how they’re leveraging multimedia to grow the loyal fan base.

Branching out from one media format to another isn’t always easy. So many have ignored it (not recommended). Terminus decided to take a leap of faith by adding audio into their mix of video content. And what better way to do that today than by starting a podcast show?

“We’re thinking of how to use podcasts to have that kind of same punchy, double-take effect that we do with our video. So we’re thinking, can we do a limited podcast series? Do we want to just do this kind of crazy concept for a podcast, do it for eight episodes and then be done with it and move on to something else? It kind of plays into that whole, all of us have a little bit of ADD, jumping from thing to thing, but that’s an idea we’ve been playing with,” Jillian explained.

After seeing the impact podcasts have on branded content, it made sense to use it as part of their own strategy. But rather than just repurposing video into audio, they decided to try and build a community. In other words, continuing conversations started on video in one of their podcast episodes. This, as they put it, creates a Terminus cinematic universe fans can indulge themselves in.

“That to me is almost what I want our content output to look like, is that I wanted to all kind of tie in, but I want it to be springboarding off of each other, and each of them are unique and have their own kind of tone and voice. But ultimately, at the end of the day, it all ties back to this Terminus cinematic universe that we’re trying to build. And then also at the end of the day, that builds our brand, which is the ultimate goal of it all,” explained Jillian.

As humans, we like to feel like we belong somewhere, and if we can find our “clique” to hang out with, even if it’s online, then we’re happy. But how do you connect with your audience via a screen? It’s about making people laugh and feel seen by the content you present to them.

Thinking Outside the Box

Scripts. Who needs them in a time when people are looking for something unapologetically real? Folks are looking for raw, authentic conversations with other people, especially during a time where things are a bit (okay, a lot) wonky.

“We’ve gotten to a point where we just have to do it. So it did start out with us being like ... We knew, I think going back doing The Roof series, that kind of came to fruition because we were like, you know what? It’s in the middle of this very, very strange period in not only the world, but in B2B and in content where it’s like all of a sudden, all the video content you’re getting is over Zoom, which is still great and still gets the point across. But there was a kind of polished component that was missing.

“So that’s kind of where The Roof was born of is this weird juxtaposed idea of like, well, we need some good polished video content because that’s going to get people’s attention and people are going to go, oh, whoa, I forgot we didn’t have this for the past year. But then also that real talk element. So we had so many people reaching out and saying like, oh, it’s been so cool to have these unscripted, really raw, really real stuff that you would only have in your marketing Slack channel conversations through The Roof video series,” Jillian shared.

Taking Chances (Even if It Means Getting into a Dumpster)

It’s not enough to just think outside the box. You have to constantly push past boundaries to grow. And it’s the same with your content. But no one would’ve thought this would translate to sitting inside of a dumpster… in the freezing cold.

So how in the world did this happen?

“Justin said 2020 has been a dumpster fire. And then it kind of just escalated from there of, well then what if we lit a dumpster on fire? And then I remember the Slack; he was like, wait, what if you got in the dumpster? And he immediately reeled it back and was like, never mind, never mind, that’s too much to ask of you.

“And I was like, I’m already looking for a dumpster as we speak. You cannot suggest these ideas to me; I will do them immediately. So that’s how it came about. And we jumped on it immediately. We partnered with a great production company here in Indy that helped us literally scout a dumpster, and we filmed on a 30-degree day in the freezing cold and had just so, so, so much fun. So it was great,” Jillian explained.

Moral of the story:

Let yourself (even in B2B) be creative. Take chances. Do things you did before (or imagined yourself doing). Because if you don’t follow through with your crazy ideas, then you’ll never know what could’ve come out of it. So don’t be afraid to break the playbook. Just be authentic.

“Our team sat down at the beginning of this year and said, okay, what do we want from our team this year? And what do we want kind of our drumbeat to be? And we kind of just all came to the conclusion that we’re like, we want to do stuff that no one in B2B has done before.

“Whether it’s a weird concept for a video series or a podcast where we’re interviewing different creatives from industries outside of B2B and putting on this kind of creative bootcamp. All these ideas that we have this year are kind of baseline for them. Is anyone doing this in B2B yet? And if not, let’s run at this as hard as we can and be the first to do it. And then in a little bit of an ego way, we kind of were like, we want everyone copying us,” said Jillian.

Creating a multimedia strategy can be fun for everyone — the brand and the audience. Interested in seeing how you can begin amplifying your content strategy with a mix of audio and video? Then you’re going to need a platform to organize and track the process. Request a demo with Casted today to see how it can streamline your crossover to multimedia. 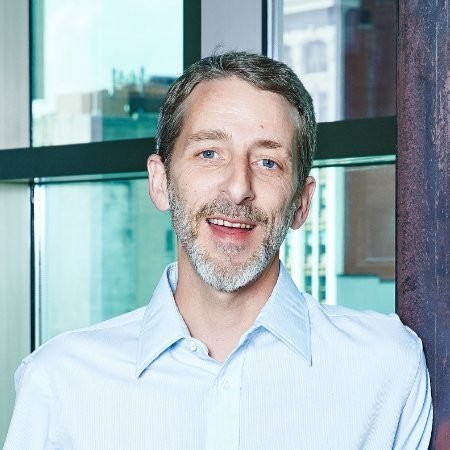 Former lumberjack, undiscovered cornetist, and ex-cog, Mark now applies his life experiences to remaining calm and sane, surrounding himself with the best humans and canines available. When not trading in words, Mark makes stuff up… and hopes they laugh.